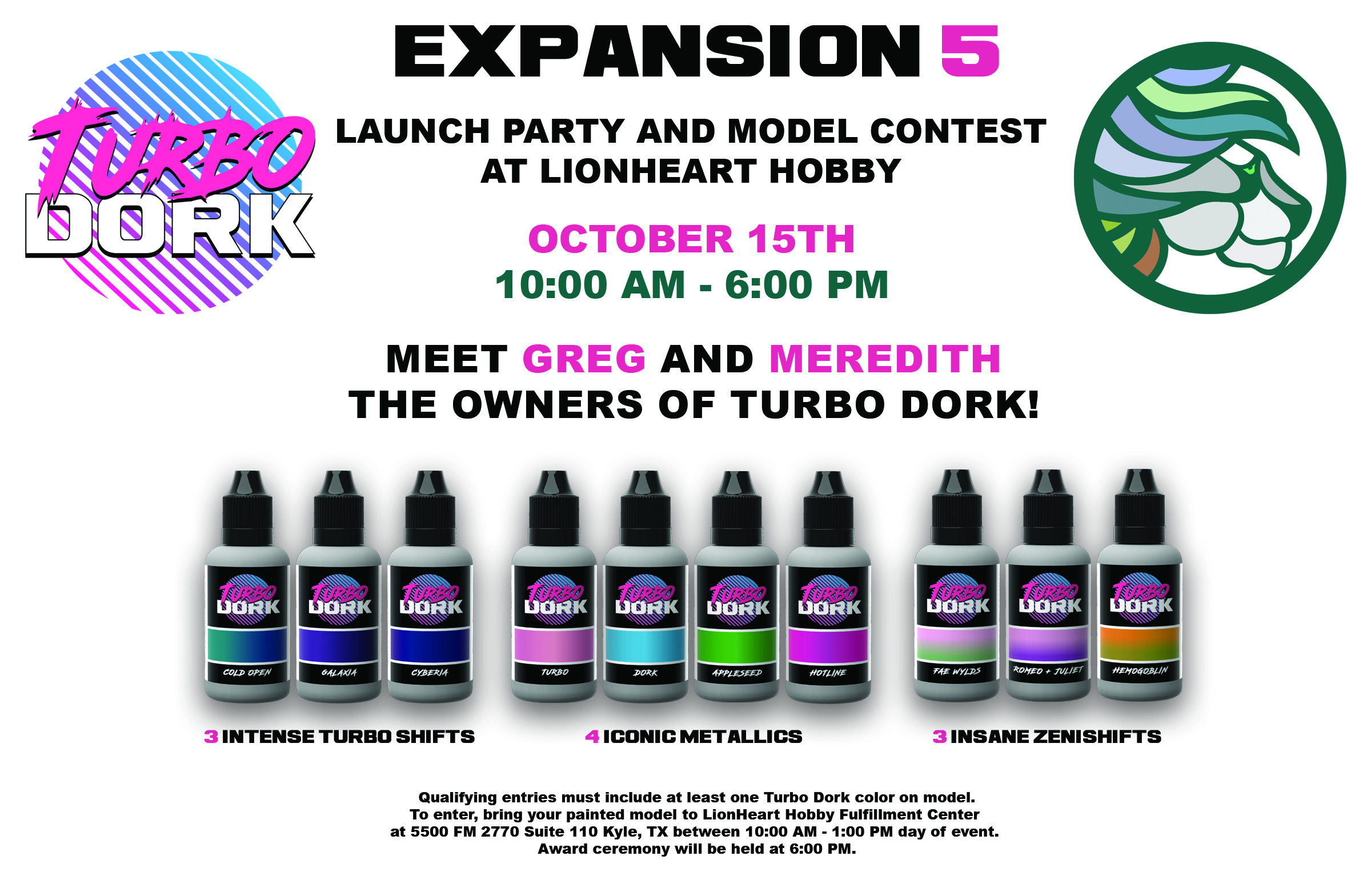 Rules: Qualifying entries must include at least one Turbo Dork color.
To enter, bring your model to our Fulfillment Center (Suite 110) on Saturday, October 15th between 10:00 AM - 3:00 PM.
Judging will begin at 4:00 PM and the awards ceremony will be at 6:00, right after the store closes. Come see the entries all day and meet the Turbo Dork team!
Contest Fee: $5.00 for the first entry and $2.00 for each additional entry.

LionHeart Hobby is using a system known as Chicago Rules or Open Judging. The big difference is that rather than picking the 3 best models from a small group of models, Open Judging scores every model into 4 tiers: gold, silver, bronze and no-award. All of the models scoring a gold receive a gold medallion, all of the models scoring silver receive a silver medallion, and so on.

In a regular 1st-2nd-3rd contest the judges would have to sort out which of all entered models was the best, second best, third best and which went home empty handed. Open Judging helps eliminate the element of luck: under this system a model's chance of earning an award no longer depends on what other models happened to show up that day.

Open Judging is used at a lot of big (non-IPMS) figure and model contests, including MFCA (figures), AMPS (armor), and Wonderfest (sci-fi).

How does it work? A lot like judging at a regular IPMS contest.

There are 3 person judging teams, made up of LionHeart Hobby community volunteers. In this way we get diverse opinions. Each judging team works through the models, looking closely at every model. The judges are looking for the same things, using the same criteria they would at a regular IPMS contest - all the basics listed in the IPMS Competition Handbook (Plus, they will be making sure each model follows the rules of the contest to feature at least one Turbo Dork paint color). After giving the model a good once over, each judge tells the other judges the good and the bad that they found.

Each judge then privately assigns a score to the model - either Gold, Silver, Bronze or No Award - according to these guidelines:

Bronze: The model has no glaring flaws in finish or construction as seen from a casual viewing distance. At closer range a number of minor flaws may be noticeable but are not concentrated in one area and do not indicate a lack of basic skills (for example, one decal, but not all, may be silvered). This level of quality indicates the modeler is doing the right things but needs to be more consistent in execution. Basic craftsmanship is good, but realism or attention to details may be lacking.

Silver: Compared to Bronze, the model has a higher level of craftsmanship in all areas: very few flaws, finishes are realistic, stance and ride height are correct, basic techniques have been used to add detail and improve appearance (exposed edges are realistically thinned, gun barrels or exhaust stacks are drilled out, etc).

Gold: In general, a Gold award indicates an exceptional level of craftsmanship - practically no flaws or omissions of basic techniques should be present. Current best practices for assembly and finishing are used throughout and are executed correctly. Often the difference between a Silver and a Gold award comes down to how challenging the build was; a more elaborate or highly detailed model is likely to demonstrate a level of craftsmanship that offsets minor mistakes. An out-of-the-box model can receive a Gold award, but it must exhibit the highest standards.

In general, in order to receive a Gold award, at least 2 judges must score the model as a Gold, and similarly for Silver and Bronze. Experience has shown that individual judges usually agree quite closely.

Hopefully that gives you an idea of what to expect at our show.