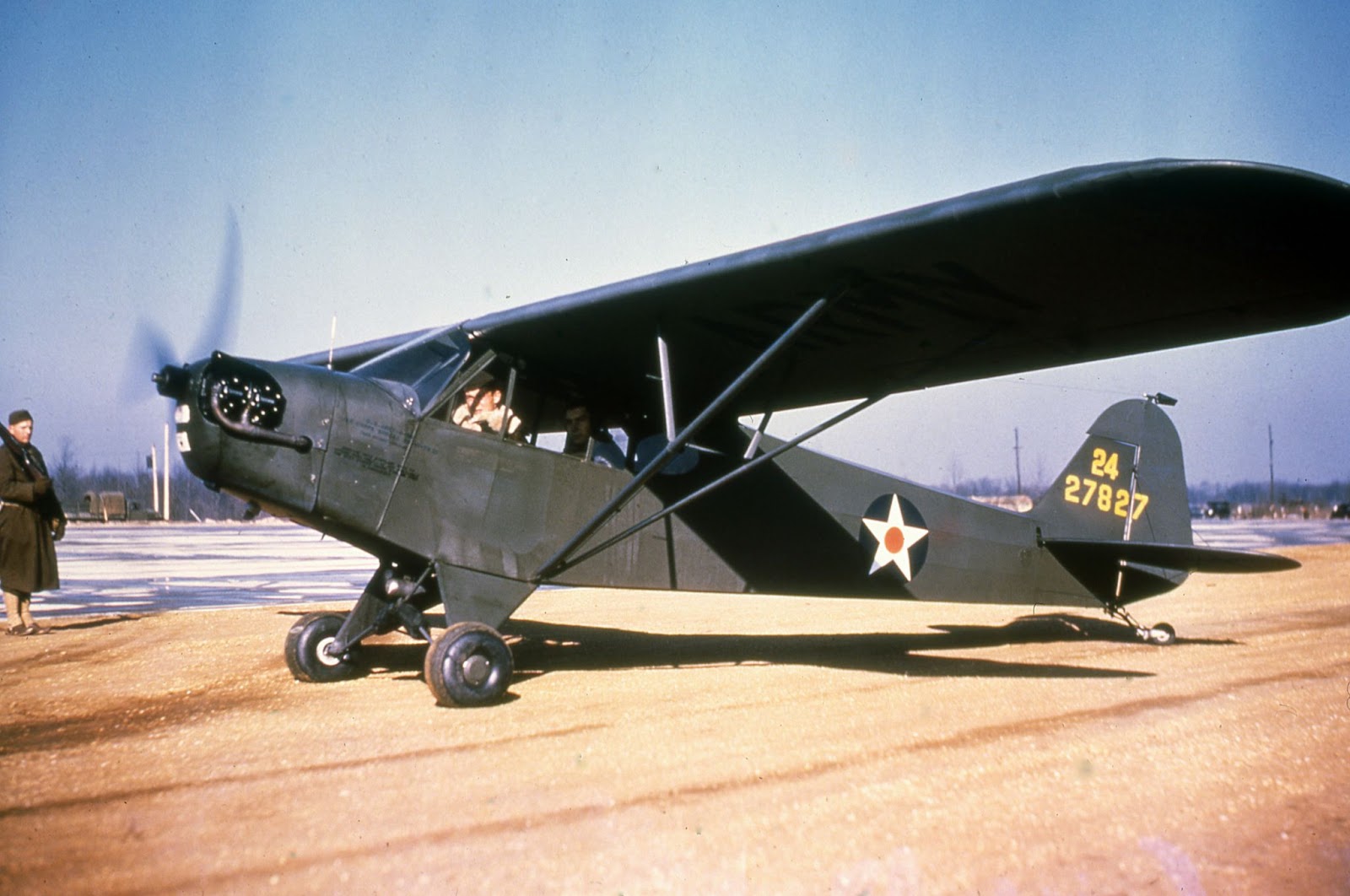 They’ve come a long way, those guys in the Czech Republic. After many years of soft tooling and difficult-to-build plastic models they’ve finally managed to hit the big time, at least for the most part. Everybody knows the story, and everybody knows Eduard to be the poster child for the success of those companies, but there are others in the game too. One such “other” is Special Hobby, a limited run manufacturer that’s been around for several decades and has been rapidly closing in on the lofty title of Mainstream Manufacturer throughout that entire time. While there’s an element of truth to the statement that they’ve achieved that status after years of being widely acknowledged as the producer of difficult to built and rarely accurate scale models, their efforts of the past several years have, for the most part, gone far beyond the kits they built their often shaky reputation on. The subject of today’s review, the 1/48th scale Piper L-4 Grasshopper, showcases how far they’ve come. It also graphically illustrates how far they have yet to go. 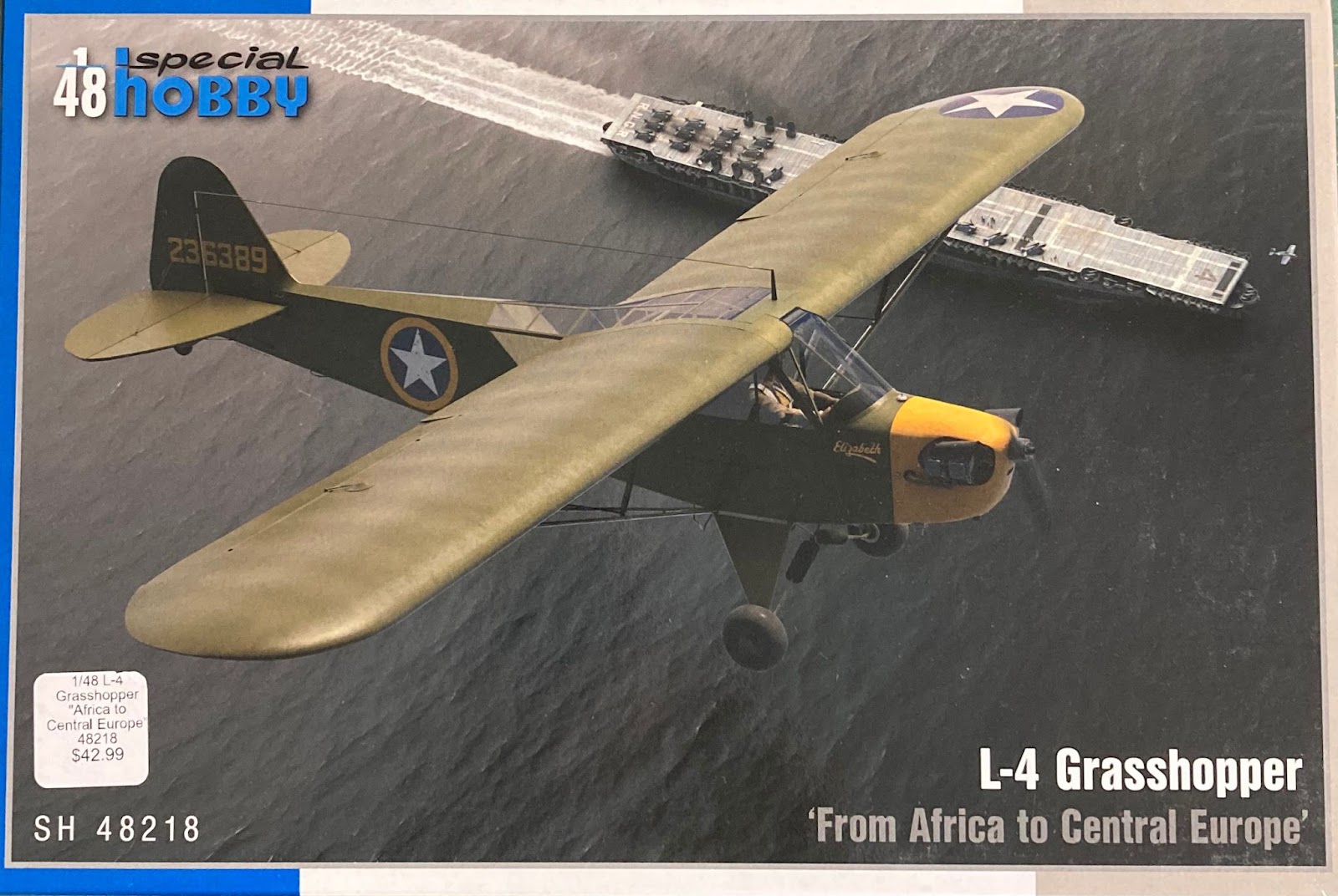 One thing about Special Hobby that you should know right off the bat: They’re fearless, completely and utterly fearless. They will seemingly kit almost anything they deem worthy of scale representation and, for the most part, will do a decent job of it. The L-4 is a stellar case in point. The real airplane wasn’t fast, it couldn’t fly very far, and it certainly could never have been described as a warplane, but it was ubiquitous. Anywhere the US Army fought during the Second World War saw the successful employment of the type and it performed those usually dull and boring missions that rarely get into the history books. Artillery spotting and liaison duties were its normal lot in life and it did them well, making a decent kit of the airplane a desired although seemingly impossible thing until recently.

Now we finally have a kit, and the Special Hobby L-4 provides a fine representation of the L-4 if your scale of choice is 1/48th. It’s petitely molded and easy to assemble in spite of its relative mass of transparencies and, perhaps surprisingly, most of the parts fit, making putty a relatively unnecessary addition to the model as long as you do your part during construction. Mold parting lines are almost nonexistent and the canopy framing, often a significant bugaboo for SH in days gone by, is more than adequately represented. The kit can be built fairly quickly and will look pretty darned good once it’s done; it’s definitely not one of those Special Hobby thrashes from just a few years ago but at the heart of it all it’s still a short run effort with all that entails. There are a few things you’ll want to be aware of before you jump into the construction of one.

First and foremost are the enormous molding bosses that have always been part and parcel of the kits produced by this manufacturer. We’ve had our fingers crossed for quite a while now that the folks at SH would manage to do away with them but they’re still there, often living in places where they create a problem. Specifically, there’s a big honking raised circle of a mold boss inside each fuselage half, right behind the windscreen and entirely visible to anyone who chooses to look inside the cockpit. Then there are the ones that live inside the wings, making the assembly of those halves impossible to accomplish without trimming. In fairness to Special Hobby this is a short run kit, and it takes maybe five minutes tops to eliminate those bosses with a micro chisel or curved hobby knife blade, but they really shouldn’t be there in the first place. You might want to take a moment to thin the top-to-bottom portion of the wing spar as well because, while sturdy once installed into the wings, it’s an easy thing to break and that breakage is equally easy to prevent. (No; we didn’t break the review sample, but only because we thinned the spar ahead of time!) 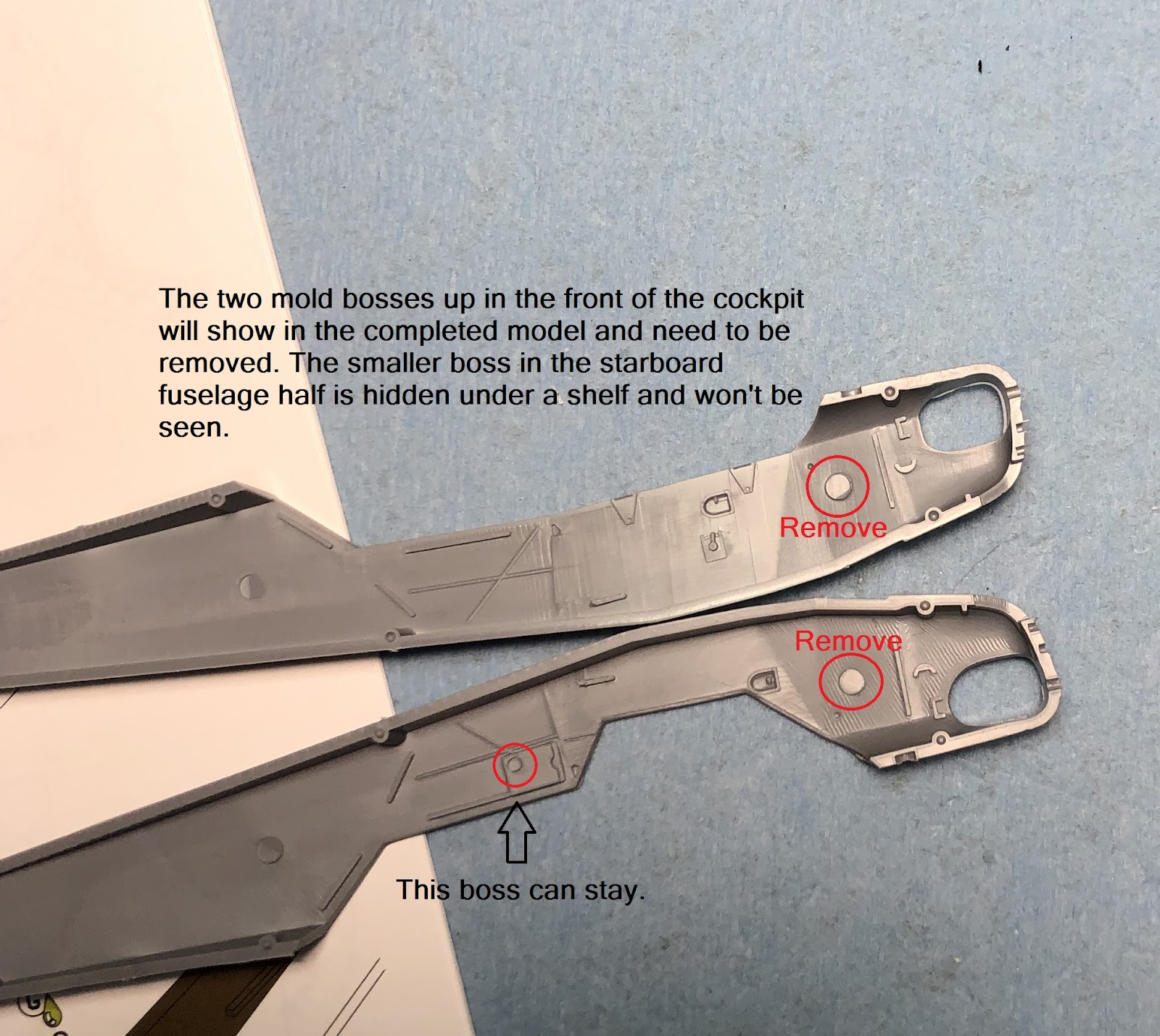 Here’s a graphic explanation of those fuselage bosses. You can see how they impinge on the interior detail! 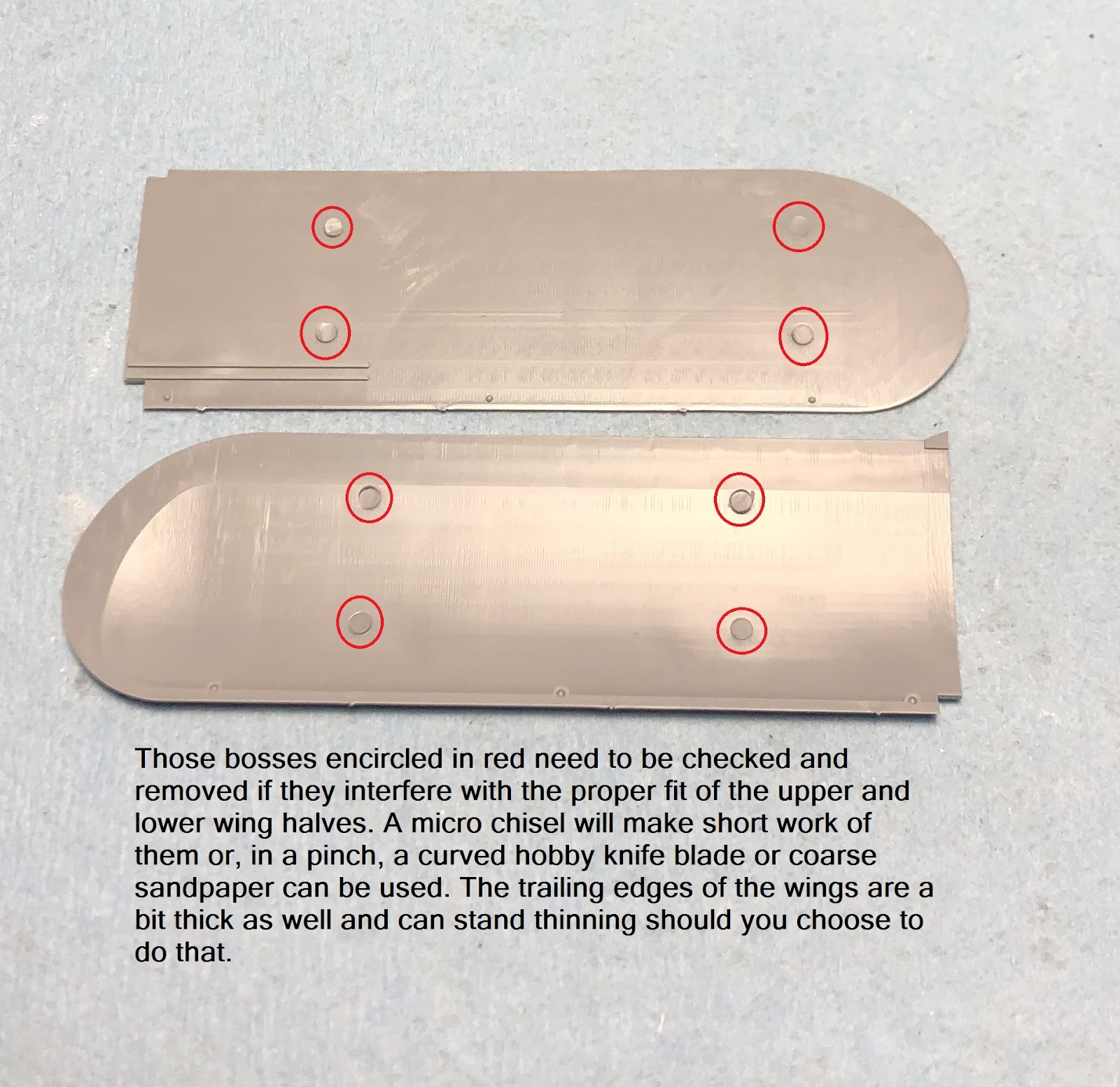 And here’s a look at the wing bosses. Not all of them present a problem but several do and it’s best to remove them.

The cockpit is another area that can try your patience, simply because there’s so much glass there and virtually nothing inside other than a pair of rudimentary seats, a couple of sticks and microscopic rudder pedals, along with some photo-etched seat belts. The instrument panel, in contrast, is well-done but it can’t hide the lack of detail surrounding it, which moves the interior of the model into a place we’ll call The Land of Opportunity. A good modeler can make that interior shine while an adequate one can make it presentable, but it’s going to need a little help regardless of your skill level, especially if you intend on modeling the airplane with its door open—a nice kit option that absolutely screams out for a decent interior.

The engine is adequately done which is a good thing since so much of it is visible, but careful pre-fitting is required in order to prevent its various components from competing for space with other parts as the modeler moves along with the assembly process. The instructions are a bit shaky at best, at least as far as the engine and interior are concerned, so forewarned is forearmed, right? 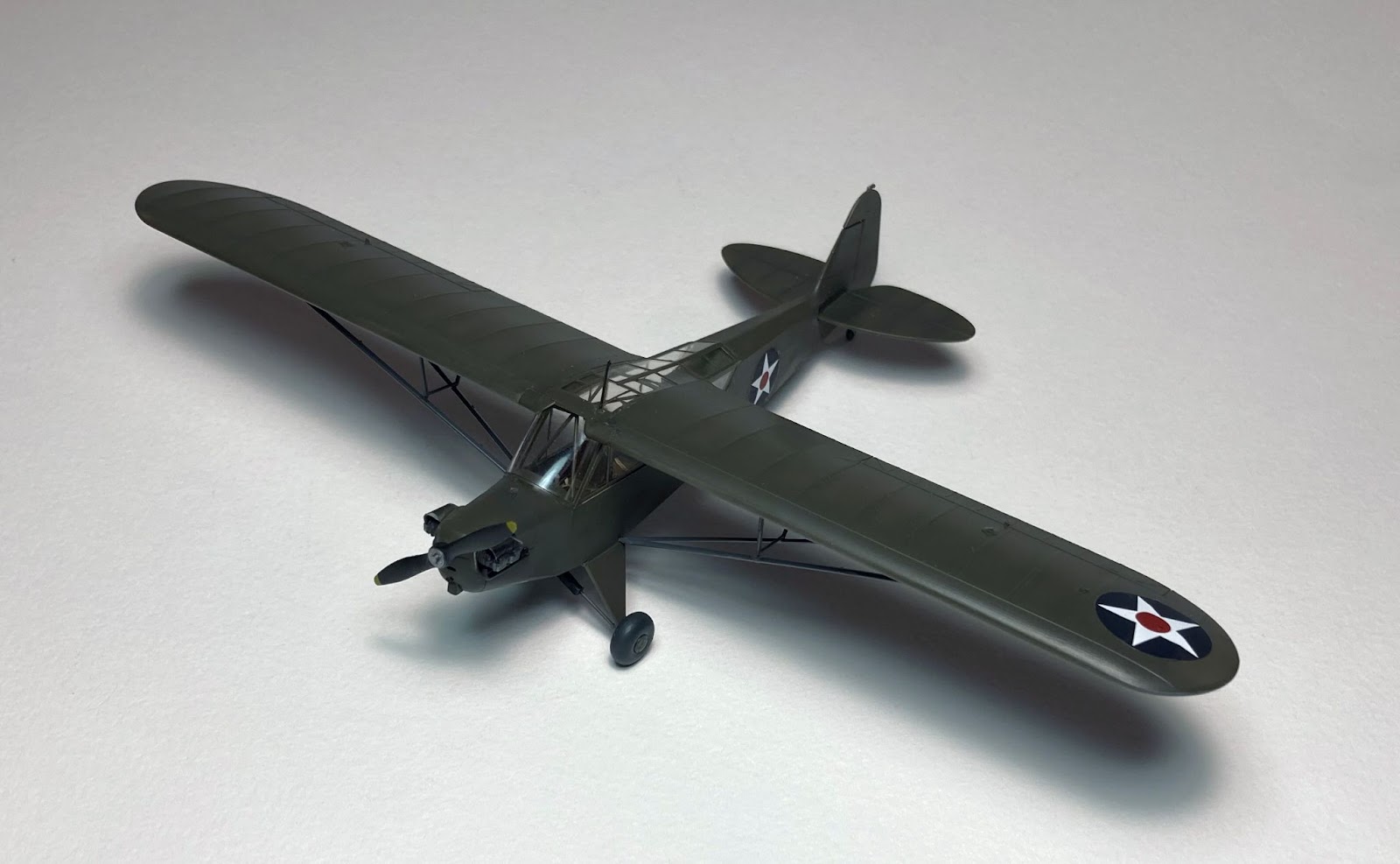 Here’s what you can end up with using just a minimal amount of effort plus a small dose of modeling skills. The sharp-eyed will note that very little of the kit’s photo-etch is installed at this point and it isn’t rigged—all of that is awaiting the application of tail numbers. 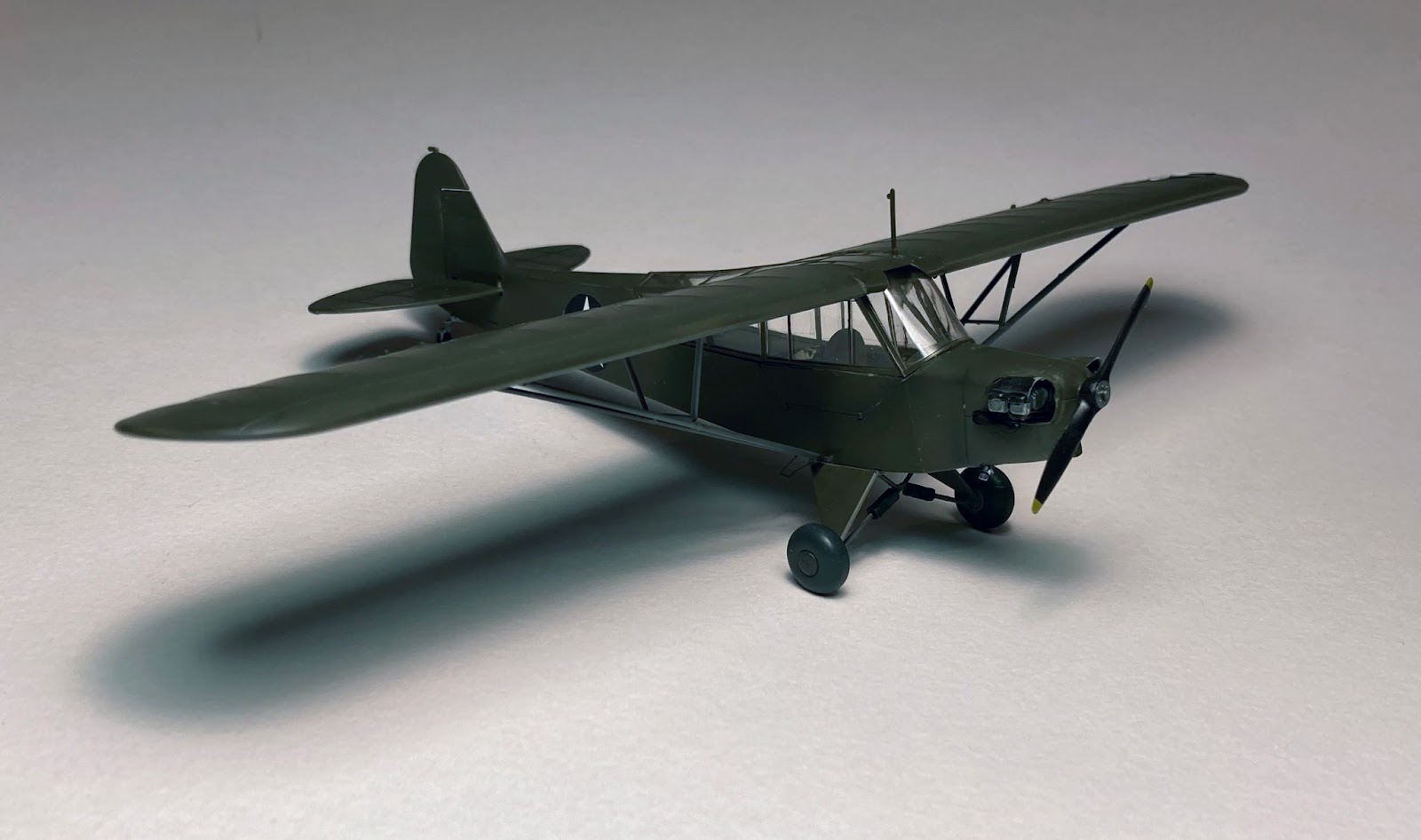 The kit comes across as having the potential to be fussy when you’re looking at that box full of miniscule components but everything is well designed and the pieces fit as long as you do your part! Note that the kit’s painting instructions are inaccurate regarding the wing struts, which are Neutral Grey rather than Olive Drab on the real airplane. 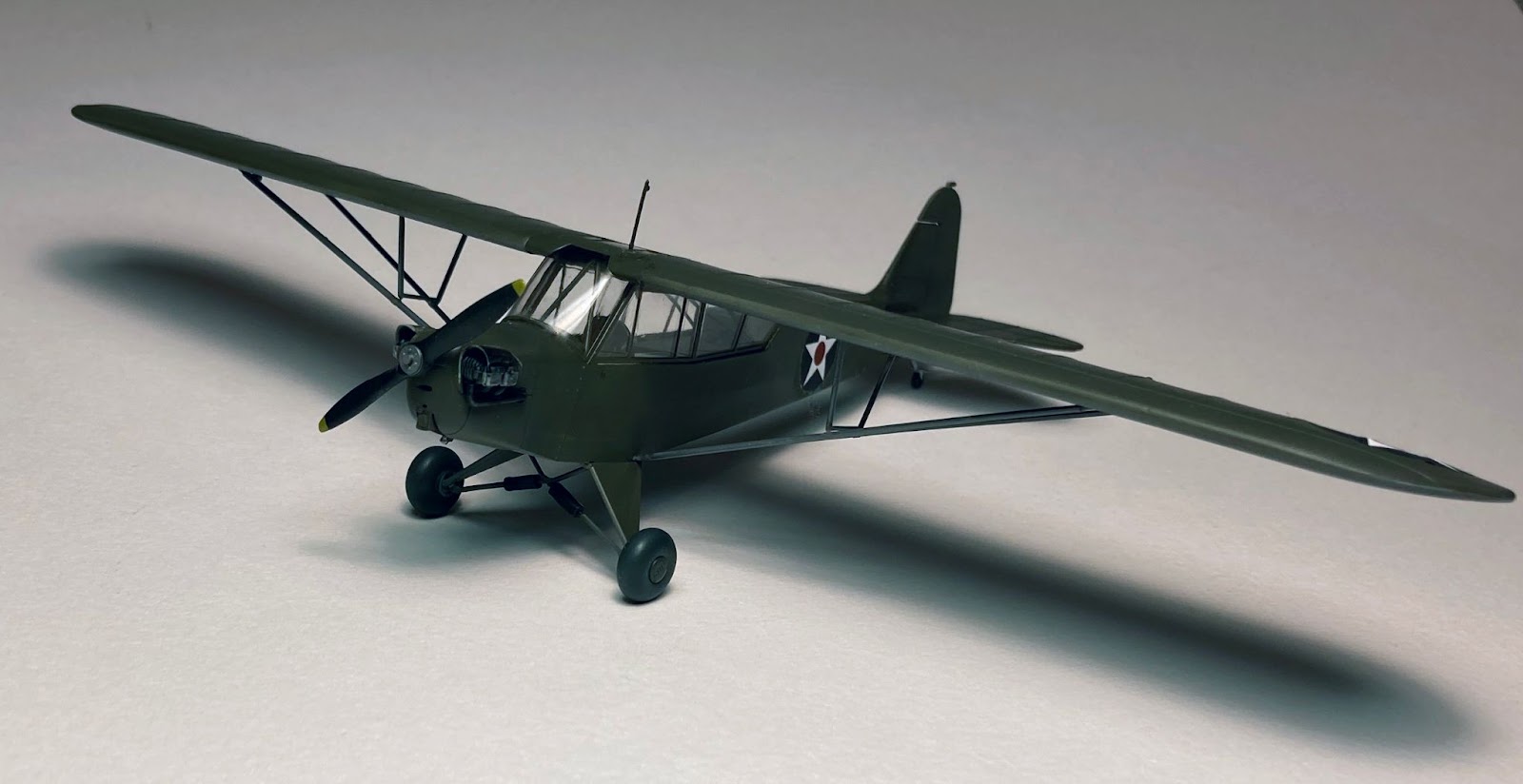 From the outside the kit is well detailed and certainly gives the impression of being an accurate representation of an L-4, but the interior could use a little spiffing up!

Then there’s that bane of the modeler’s world; photo-etched parts. There are only a few in the kit and they’re well done, representing such things as steps and lift handles, but they’re tiny and the model will lose part of its accuracy if you don’t use them, or replace the components they represent with fine wire or similar. 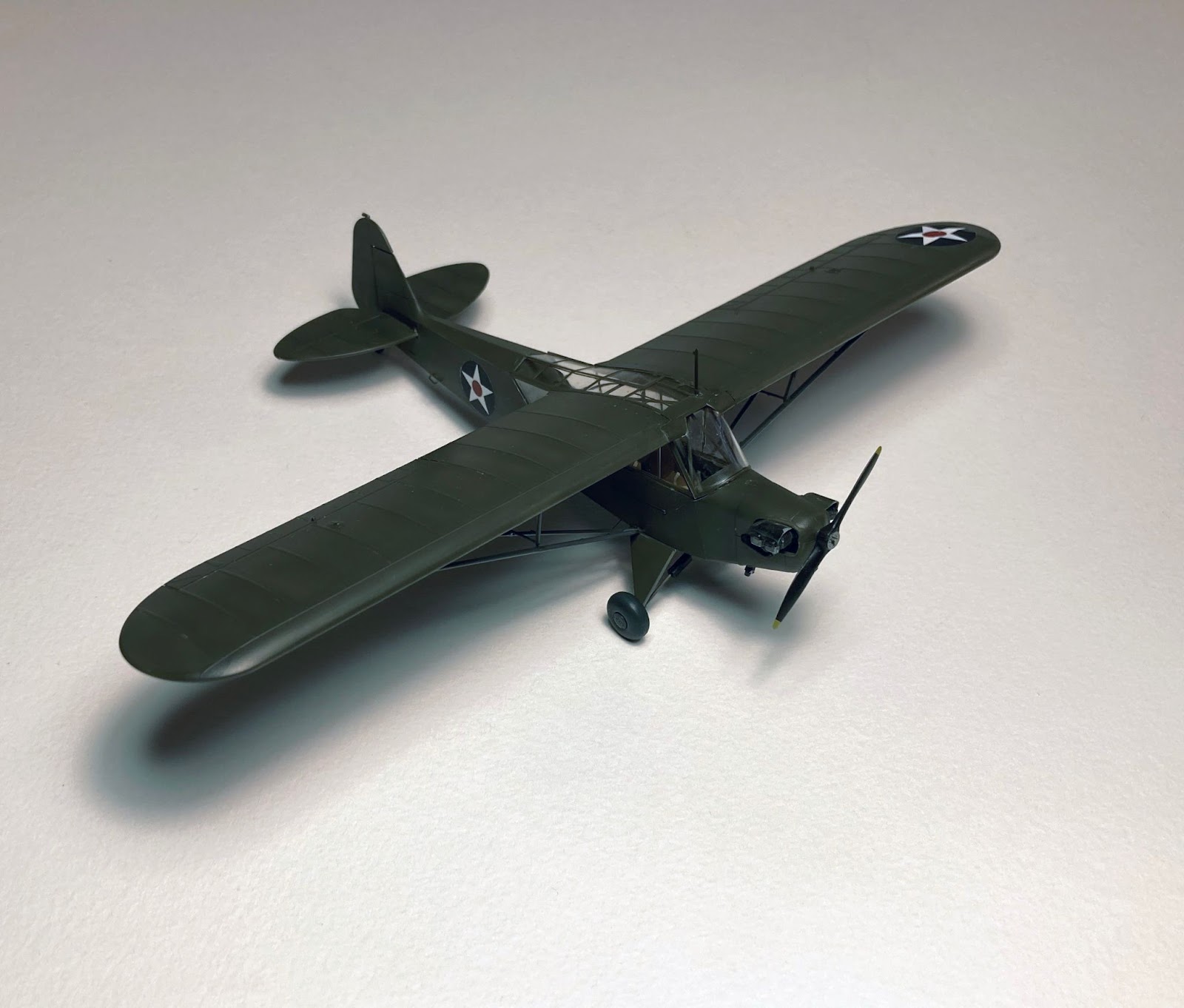 It seems as though everyone has a collection full of gun-shooting bomb-dropping rocket-firing warplanes, but utility and transport types have seen extensive service with every air force in the world and are rarely kitted. Special Hobby’s L-4 provides a really nice diversion from the usual collection of sturm und drang and looks good on the shelf. The kit is easily overlooked but shouldn’t be!

Finally, a couple of the parts are just fragile, mostly because they’re so tiny. The tailwheel is a fine example of that; it’s small and has a tiny attach point. Care is definitely required. For what it’s worth, we used regular tube cement to tack it, and select other components, in place prior to hitting them with a spot of Tamiya Extra Thin to lock things down permanently. We also used Extra Thin to attach the transparencies, which worked out just fine—the kit is very well engineered and for the most part will assemble without drama as long as you exercise a bit of caution during construction.

One more tiny thing—this model needs to be rigged in order to represent the radio antenna and the various exterior control cables present on the real airplane. The model you see before you obviously hasn’t had that done as of yet, but that’s because we aren’t done with applying the markings, and speaking of the decals, we’ll jump right out and say we don’t like them, mostly because some of them are “faded” to represent an aircraft that’s seen a bit of active service but also because they feature that same “dot matrix” approach to reproducing the colors that Eduard has recently begun using. They don’t come across all that well and the color given for what should be Insignia Blue on the underwing U.S. Army markings is just plain wrong, but they are usable, barely, and markings are provided for four different airplanes, one each from the campaigns in Tunisia, Italy, France, and Czechoslovakia. We didn’t use them (and are still trying to scrounge up the markings needed to replicate that spiffy example of the type up there in the header of this review) but they’re attractive and any one of them will look good on your completed model.

Let’s summarize, then. The kit is well detailed, although it needs some help in the cockpit, and it’s relatively fragile which means you’ll need to be both precise and careful when working with it. Those bosses inside the cabin and the wings will have to be removed and, although we didn’t mention it previously, you’ll need to be careful when assembling the clear bits, mostly just because they’re clear bits! It’s a good kit, and miles away from anything SH was producing even a few short years ago. It wouldn’t make a good first model for anyone but it isn’t all that difficult to work with and is perfectly buildable with the usual caveat that the modeler has to do their part. We like the kit and are darned glad SH decided to add it to their ever-increasing catalog of airplanes that aren’t Mustangs or Messerschmitts.